Venice Beach Pier- The History of the World Famous Peir 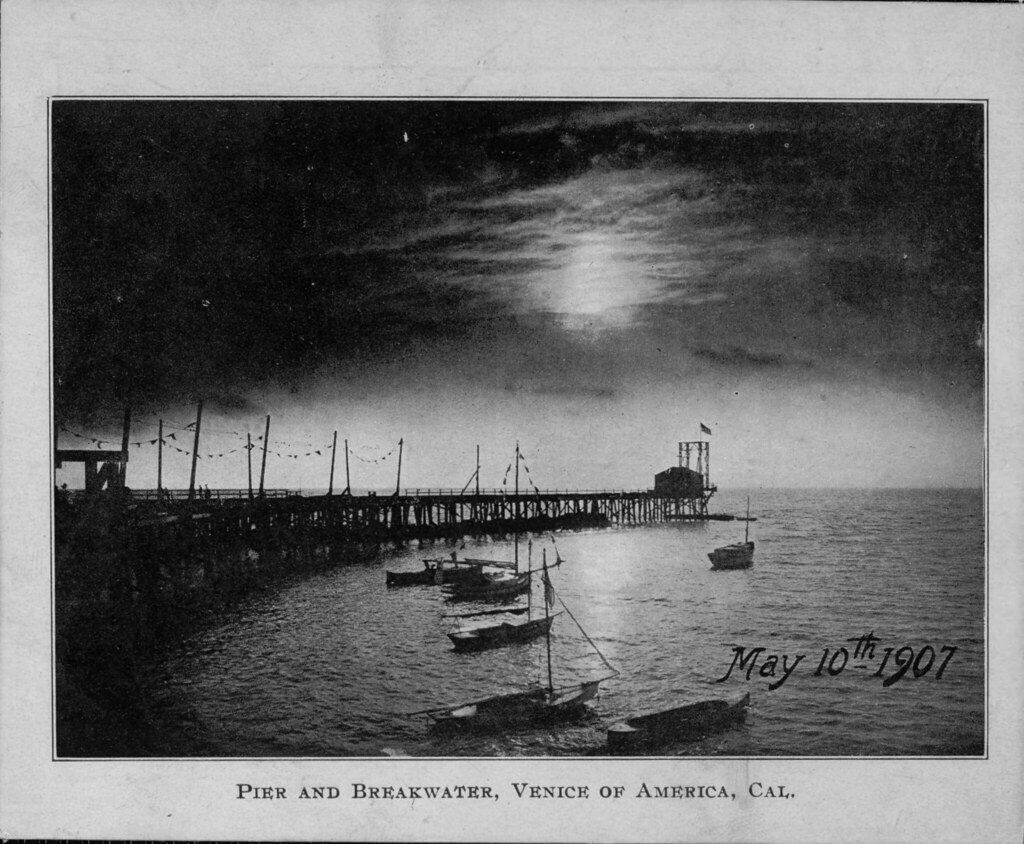 Did you know that the very first Abbot Kinney Venice pier was never even used? That’s right, the winter storms of early 1905 totaled it and 1000 laborers were set to work around the clock to rebuild it in time for the rescheduled July 4th opening.

Venice of America's initial plans in 1904 called for a 900-foot long, 30-foot wide pleasure pier at the foot of Windward Avenue. The original plan featured a Casino and Bandstand Tower at the inland end of the pier, a Ship's Hotel that would resemble an ocean liner permanently docked beside the pier and a 3,500 seat Auditorium to be used for the Venice Assembly.

The pier that was opened in 1905 was not 900 feet long though it was a whopping 1200 feet! They added the extra 300 feet to the plan as sort of a buffer for any future storms. A $100,000 storm breaker was also added to fend off any future massive storms.

In 1905, the pier only had two attractions: the auditorium and the pavilion. It was not until 1906 that a $40,000 dance hall was constructed. It was the biggest dance hall on the west coast, and it

By 1906, the pier held an Auditorium, a Dance Pavilion, a Funhouse, the Virginia Reel, a tea garden, a zoo, a roller rink and a bowling alley, as well as attractions and vendors' stalls. The Dance Pavilion was the largest dance hall on the west coast at the time. Building material arrived on June 17, 1906 along with 125 carpenters and electricians who attempted the task of building the dance hall in just 17 days… just in time for its July 4th dedication. While they didn't actually finish the building 190 x 210 foot building until the end of July, they managed to put up its walls, roof and complete its hardwood dance floor (14,560 square feet) in time for the celebration.

In 1909, it was decided that the pier would also serve as a place of amusement, not just as a social gathering space. It began with the aquarium, where 48 glass tanks surrounded a sunken seal tank and Sea Lion shows were performed near the entrance.

In January 1910 it was announced that they would construct a one and a half mile scenic railroad behind the dance hall and pavilion on the north side of the pier. Several small concessions were also added to the pier's south side. These included a Dentzel Carousel, a Hades attraction, a Japanese Tea House and the Ocean Inn restaurant.

By 1913, amusement attractions such as the Ferris Wheel, Automobile Races, The Rapids, Dippy Dips and the Virginia Reel were open and attracted thrill seekers and families alike.

Improvements continued to be added to the pier up until 1918 with the start of WWI. What turned out to be the last improvements on the Venice Pier were made in 1920, when a new thrilling roller coaster called Big Dipper was constructed.

On the night of December 20th, 1920, the majestic Abbott Kinney Pier met its end when a gas heater ignited a raging fire. Within just a few hours the entire pier, with the exclusion of the new coaster and the bandstand tower, were destroyed completely.